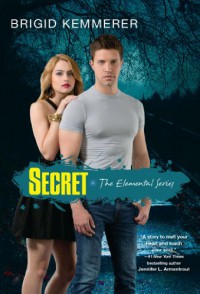 SPOILERS AHEAD UNLESS YOU'VE READ BREATHLESS

Almost. This almost dethroned Spark as my favorite book in the Elemental series.

(You! Yes you! Stop snickering over the cover for a minute and listen.)

It isn't common to see a shift in the pace of a series by its fourth book, because fans, more often than not, are already comfortable with a particular pattern. So in more ways than one, Secret (and Breathless) was pretty ballsy choosing the unexpected, introspective road, deviating from the adrenaline, the mystery and WTF plot-twists I've come to expect from this series. From how everything started in Storm to how things progressed in Secret… I mean the steamy make-out scenes alone? We've Come A Long Long Way, Baby (is it the cake pops? Because seriously Starbucks people, keep giving Brigid those cake pops). I couldn't have imagined this kind of book for Nick when I first read of him but to say I'm pleasantly surprised is a vast understatement.

He'd be the white knight in shining armor. He'd rescue her. And then he'd kiss her on her forehead and go off with a knight of his own.

I do like reading LGBT YA books but somehow I've steered clear of topics where the protagonist is at that threshold of sexual discovery and awakening because I make no claims of being fluent about the struggle and emotional turmoil a character like Nick goes through at that point in his life: level-headed, straight-A, responsible and introspective boy coming out to his brothers? To a brother like Gabe Merrick? The push and pull between what other people wants, which he has always defaulted to, and learning to go after what he wants can be simultaneously awkward, frustrating and heartbreaking.

And at certain points this was all of that. But I thought it was presented in a smart and relatable manner. Or as relatable as it can get for me. Nick was a very conflicted character, probably borne out of all the pressure he's put on himself for so long from school, from his family and his friends. He's so scared of getting judged of his choices, of his family being narrow-minded about his situation that he has also unwittingly judged them back ahead. I had to pause and wonder what made him so faithless of his brothers' and Hunter's capacity to understand his situation.

However, adding Quinn's troubled backstory of an abusive home, self-esteem issues and her unusual function in Nick's life did feel like it was too heavy on heavy. The usual sass and snark even felt a little reined in and with no respite from the angst, the story volleyed from Nick's struggle to Quinn's conflict not allowing me to digest and wallow in the ramifications properly. Instead of seamlessly amplifying each other's story lines, I felt like they stumbled and tripped against each other, trying to best each other in driving me crazy with their choices while breaking my heart.

I actually like Quinn here and even in Breathless. I found both her and Nick's isolation from their family and friends a veritable point of depth in their relationship. She's suffered some blows in her life that made her attraction with Tyler sound and logical, that their edgy and intense exchanges felt in-character and real. Her brokenness and her misguided sense of self-worth should've come across pathetic and whiny to me anywhere else but here.

More than anything, this book's heart lies in the relationship between the brothers and while Michael delivered in his awesomeness, I found Gabriel a bit of a disappointment. Seeing as how close he and Nick are, perhaps I expected more from him, something with better and proper depth, something beyond his stereotype. I really wanted him to prove Nick wrong but that's probably the Gabe fangirl in me talking. What little moments Chris and Hunter had with Nick were lovely, which made me miss them a little more.

Secret was equal parts touching and infuriating and wholly courageous and breathtaking at the same time. It wasn't a perfect fit with me but I don't think that was the point. I think it sets out to deliver a message of hope and encouragement. It got a little too heavy-handed for me at some parts but never lost its heart and good intentions even in those moments Anyone who hasn't started with this series yet probably won't expect this kind of depth from a story about four brothers with elemental powers and I really shouldn't talk so much about it anymore as it ruins the surprise...

But I really can't wait for Michael's book.

ARC provided by Kensington Books thru Netgalley in exchange for an unbiased review. Quotes may not appear in the published edition.