You're A Virgin, Who Can't Drive 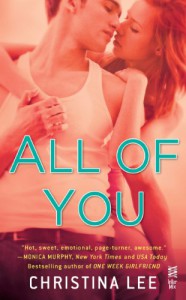 Whenever I pick up a New Adult book with an "intriguing" blurb...

One of the recurring themes in this book was a high school game Avery and her friends devised where they answer a certain question with five words or less. And since I can’t even find a quote remotely interesting enough to start off this review I’m just going to Five Finger this, baby:

There are books that waste your time with a bad story or unlikable characters or implausible plot development or cheesy dialogue or… really I could go on, but this one suffered a healthy dose of each of that plus the enraging promise of something that is original, interesting and gourmet but ultimately delivering something bland, lazy and gag-worthy.

Avery Michaels is a Nursing student who sleeps around, shying away from any form of commitment after her mother’s old boyfriend attempted to rape her when she was sixteen. Adding insult to the injury, her mother refuses to believe her claims and instead sees her as competition. She then meets Bennett Reynolds, the art student slash tattoo artist who just moved in her apartment building. He smells like coconuts (he smelled like coconuts NINE fucking times in this book, by the way) and she kinda wants to hook up with him… except he’s a virgin.

”Are you waiting for marriage?”

Seeing as this was technically the sole reason I gave this book a shot (Because really, I need another sexually adventurous heroine with father figure issues like a higher interest rate on my mortgage) I was quite interested why an attractive, strapping young man with an adequately sized penis would make this decision. I mean, a petri dish as soaked in hormones and alcohol as college is, it’s practically The Road NotLess Travelled.

Unfortunately, Bennett’s explanation was quite fuzzy and confusing. He claims he swore off casual sex altogether because he has to take responsibility of his family seeing as his mother is unreliable and his sister got pregnant when she was sixteen. Which is sweet, though a bit extreme and when called out by Avery on this bullshit reason the conversation strayed to some slut-shaming.

But don’t you think that’s extreme?” I asked. He rolled his eyes, like he’d heard that one before, too. Probably from the hordes of girls that wanted him so badly. But still, I tried making my point. ”There’s plenty of good birth control out there, and lots of people are having sex and not getting pregnant.”

He apologises, but then apologies are only good until you repeat the offense and Bennett’s judgment of Avery’s lifestyle was quite stark and recurrent throughout the time when they weren’t together yet.

I really should feel more enraged by this but Avery’s such a cardboard heroine. I’m still not quite sure she has an issue to begin with. I hardly remember anything about her. She’s made out to be a “hardened, broken and closed off” character when her depth was more along the line of coconut scenting, checking out Bennett and those who are checking out Bennett and hanging out with friends who I am supposed to believe are close to her because they call each other bitch, dickhead, asshat, asshead, dick, dill weed among other things. She’s supposed to be strong and independent but gets the first tattoo Bennett suggests while they were making out. Christina Lee wants me to believe she’s experienced and mature but sends her to Bennett’s room to talk about their relationship after he expressly tells herhe needs time alone to think.

Much of the tension and kerfuffle came from Avery and Bennett NOT having sex that I was expecting some climactic profession of love and overwhelming emotion when they eventually DID have sex… which of course didn’t happen. In the end I was scratching my head why they held it off for so long in the first place while gagging over the cheesy dialogue courtesy of our virginal hero in the throes of passion:

”Avery, I have this overwhelming need… to be inside you.” I melted into the covers, my body becoming liquid. “Will you let me?”

”Oh God, Avery.” He thrust himself back inside, the tempo controlled and deliberate. “You… I… Jesus, this is unbelievable.”

Yes, this was ALL WITHIN ONE SCENE between Bennett and Avery's Magical Vagina. It’s like listening to ESPN with the players commentating on the sport as they play. And Bennett must do a lot of cardio to be able to do all that action and think of all that craptastic sex-talk.

I was going to list down what this book did right but it just gave me too much of a headache. I was going to say something nice to balance out all that animosity because to be fair, I did finish it.

Someone might mistakenly find a reason to pick this up and I don't want that on my conscience.