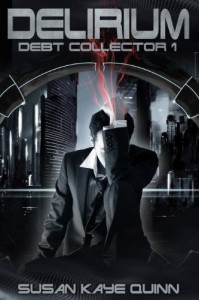 …they tally it up, and when your debts - medical bills, taxes, that foolish vacation you took in the Bahamas on credit - when all of it is no longer worth your future productive contribution to society, otherwise known as the price of your life on the open market, they call in the debt collectors.

As a first book in a series, I thought this was pretty impressive. True, the world building is still pretty flimsy and the protagonists are severely lacking in the personality department, but in terms of keeping my interest for it’s short length and making me curious for the next one, Delirium was pretty good.

The premise incorporates some elements of that film In Time where time is the new currency, except here someone is tasked to collect the remaining time from a dying person whose remaining days alive is deemed worthless by some obscurely depicted agency. This remaining time is transferred to someone whose life is valued in society and thus needs to be prolonged, for example, a scientist researching the cure for cancer.

Lirium is one such collector and he paints a pretty detailed picture of his way of life as he runs through the motions of his job and the rituals involved in dealing with the after: sex, alcohol and depression. Conflict arises when the prostitute he hires turns out to have an extraordinary and illegal proposition for him in exchange for her services.

”If you help my sister,” she says very solemnly, “I’ll have sex with you, just like I said.”
I take the shoes from her, break off the dangling, busted heel, and hand it back with a smirk. “Then we better go see if you actually have a sister.”

For some reason, this story played out in my imagination like a late 90s Japanese anime OAV, much in the stylistic (not thematic) vein of Kite. Lirium is a hardened and cynical hero, immersed in the grisly world of prostitution, substance abuse and social injustice, now forced in a situation that leads him to question everything he has believed in. The conflicts presented here were more personal for Lirium, though it plants some seeds of doubt that will probably play a role later on in the bigger picture.

The characters did feel lacking any perceivable depth in them, coming across as perfunctory devices meant to deliver the more interesting setting. Though I suppose this was intentional, giving much room for the reader to be curious enough to discover more about Lirium and Elena in the next books. I still felt some personality and background from either protagonists would’ve been welcome. Elena felt like a two-dimensional stereotype and the finer details on Lirium’s job as a collector came across a little rudimentary. I was particularly fuzzy on how the alcohol and the sex factors in the story. These were details that I felt needed to be clear this early in the series seeing as its a vital component of this instalment’s plot.

That being said, this was a pretty solid introduction to a very intriguing story. One that promises edge, grit and complexity in its progression.

Review Copy provided by the publishers.