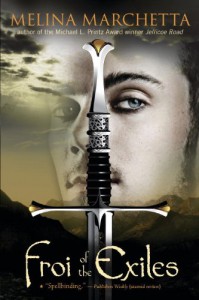 ”Where do you hail from Lumatere?” he asked suspiciously.
“I was found in exile,” Froi said, having no reason to lie to Ariston. “I belong to all of them.”

I choose you, pikachu Marchetta!

And good lord is she doing a masterful job at killing me, this woman.

I don’t want to write anything lengthy or get into my pretentious space (which I indulge in from time to time and for which I apologise profusely) discussing the psychology of war, rape, abandonment, the lesser evil etcetera. Because, let’s all admit it, after finishing this installment, there’s an irritating tug in some nameless part of your brain that will not cease until you read the first words on Quintana of Charyn.

Froi of the Exiles takes place three years after the end of Finnikin of the Rock where Lumatere is still trying to gain its footing with Isaboe and Finn dealing with the tedium of settling civil discord and diplomatic border relations. One such issue is that with Charyn. An opportunity presents itself where they could exact justice on their former captors, sending Froi as an assassin with the mission to kill the king.

Okay we’ll stop there because all the fun stuff is a little too spoilery for me to discuss.

The story shifts between a couple of perspectives: Froi in his travels to Charyn, Isaboe and Finikin living the charmed married life with their child, Lady Beatriss and her struggle to find her place in post-war Lumatere and Lucian of the Monts dealing with the responsibilities left by his dead father. And in between those interconnected story lines are about close to twenty secondary characters with more complexity, depth and texture than the people you work with everyday. I am not even kidding, there’s this one chapter, yes ONE, where Froi stumbles on a couple outside Jidia…

A horse handler with no horses and a midwife in a barren kingdom.

… and gaddamit if that doesn’t stir something in you, that one chapter about Hamlyn and Arna. Or that one scene with Beatriss, Tarah and Samuel in the front steps of her house, looking over the emptiness of Sennington’s fields.

It’s the smallest scenes, the subtlest turns in her phrases that fillets your heart into thin slivers of flesh.

I’m sorry but Marchetta just puts every high fantasy book I’ve read so far to shame with the sheer imagination, complexity and pure emotional murder her creativity is capable of subjecting me to.

Do I even want to get into Phaedra and Lucian? Because while I loved certain aspects of Froi and Quintana’s story, I do find their chemistry a little too Sid and Nancy for me. The entire half devoted to Charyn was gritty and chaotic, Quintana was too abstract a character to make a firm grasp of. The history of Charyn was quite intricate and took some effort and focus on my part to keep track of. I’m not sure if this was the cause of effect of the Gargarin-Arjuro-Lirah subplot but that part of the story felt a little clunky and too overworked for my tastes. It bled into too many sub-subplots that were too intricate to keep this a recreational read.

And I felt that it was in these lapses that Lucian and Phaedra’s ninja storyline won me over. Hook, line, sinker… Bert and Gert.

There are eight romantic pairings in this book alone, something I’ve had issue before elsewhere. Yet each dynamic was distinct from the other and each didn’t feel like they were inserted in the story gratuitously.

I loved Jory, Tippideaux and Grijio (who was such a Chandler Bing character, honestly!). I loved a lot of the characters in this book, yes even Arjuro and Gargarin had their moments in the midst of their draggy pasts, but what I loved the most was I could feel Froi’s conflict, every time he misses Lumatere while he finds an awkward comfort, a sense of home in the wretchedness of Charyn… it’s a struggle I’ve not read of in the past. Yet one that, I find, resonates effectively.

I hate this review because it’s all that my broken pieces can churn out with one eye looking at Quintana of Charyn. I feel it a bit of a disservice to the brilliance of this author’s heart and imagination.